I've been told I should make a blog many times, and have always thought about it during/post race, but it doesn't happen… I already regret not making one after Oil Creek last fall. That race was an awesome experience that I won't forget, but I know little details have already leaked out of my memory. I can't see many people reading my blog, but hey, maybe I'll want to relive my adventures when I'm old and slow.

So, here goes, I'm officially a blogger. And where better to start then with the inaugural Manitou's Revenge 56 mile this past weekend? I heard about this race via Facebook several months ago, before any permits were approved and nothing was set in stone. But I was immediately interested. A 50 miler through the Catskills? And not just a 50 miler, one covering multiple summits with 14,000'+ gain. Sign me up! David and I had been up there twice now, both in winter (so much snow this past March!) and we absolutely loved it. The trails and mountains there are so much different then anything we have here in PA, and four hours is a short drive for a long weekend!

Early Friday afternoon David and I packed up the car for the weekend, got Reis' stuff ready, and picked up Jeff (who took vacation from work just to go with!) and we headed to Phoenicia, NY. We arrived to get my packet just about the same time Jesse, Monica, and her cousin Steve did, so we enjoyed some hanging out and discussing just what we were getting ourselves into come morning. David, Jeff, and I soon headed back to the inn we were staying at a few miles from the finish after picking up a few pizzas. David and I went over the nicely detailed map that came in the packet, and discussed the plan for the next day before laying down for some sleep. Mine was fused with dreams of arriving late to the start and trying to catch everyone, which usually happens before races. All too soon, we were heading to the start in Windham at 3:45. 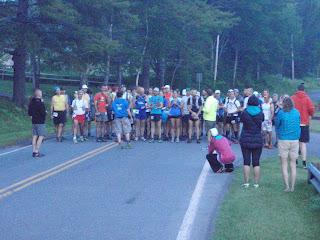 I love low-key races! They are so relaxed; we saw some familiar faces, chatted a bit, then I got good-luck hugs from David and Jeff and lined up on the road with everyone else. Charlie Gadol, the race director, gave us a few instructions, before blowing a party-type whistle signaling the start. We headed down the road for about 3 miles before hitting the trail. I ran a steady pace on the road while chatting with Chris Coulston, a runner from Erie, who runs most of our Central-Pa races. Once on the trail, several people passed me as I kept at a comfortable pace. I talked with a few people, but mostly just took in the incredible early morning views as we climbed Blackhead mountain. We got above the clouds, and only could see a blanket of white apart from peaks in the distance. 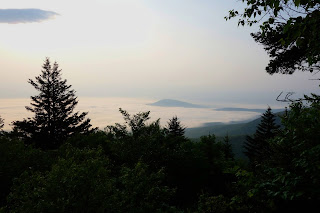 The first few aid stations flew by as I moved through quickly thanks to David and Jeff's awesome crewing abilities. At miles 10 and 17 I just swapped a bottle and grabbed a gel or two. I was feeling pretty good, but for some reason my legs were feeling sluggish on the climbs. Residues from the 40 I paced David at his 100 last weekend? It was disconcerting this early in such a long race, but it eventually faded. The temperature was also starting to rise. I ditched my shirt early and made sure I drank plenty. Only 4 to the next aid, and then the long stretches would start. I could see Jesse just ahead of me, and we ran a bit here and there together, but mostly I could just see him in the distance. The section flew by, especially with a long runnable downhill coming into the Palenville aid station (mile 21). I spent a little more time here, drinking extra and replenishing my spi-belt with gels. Then I picked up an extra bottle and headed out for the first ten mile stretch with Jesse and another guy just ahead.

I was excited about this section because it was in an area I had wanted to check out the last time David and I were here, but we ran out of time. I definitely want to come back! The trail took us by the trail to Poet's Ledge without a glimpse, and over a trail that seemed to be above at least two waterfalls! I could hear them, but couldn't quite see them without stopping and looking. The creeks were welcoming for a quick splash on the face and a refresh to the feet. The section was super muddy after this, and I had pulled ahead of Jesse and the other guy, making it a pretty lonely section. Hunger started making a pit in my stomach, so as soon as I came into the aid station I grabbed a sandwich and sat down to change my shoes. I learned I was in fourth now, with third not very far ahead. 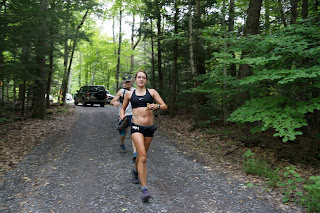 Jeff left the aid station with me and we set out on what I knew was to be the toughest, yet most awesome section of the course. It was only 9 miles, but I knew it would take a while.  After a stretch of road baking in the sun, we started on the trail up Indian Head Mt. It was nice having Jeff with me and getting to talk for a while as the miles passed. I saw third place ahead of me and soon passed him on the climb. And what a climb it was! This stretch of the Devil's Path is one of the reasons why I love NY trails so much, at least in the Catskills and Adirondacks. Most of the climbs require use of the hands. On some parts I threw my bottles up ahead of me just so I could pull myself up the rock!

Jeff's legs weren't feeling so hot so I eventually moved ahead on my own. Moving across the top of Indian Head, I was already overheated and thirsty. A steep descent down Indian Head was immediately followed by another steep climb up Twin Mt. The attempt to preserve my water was unsuccessful, it disappeared quickly in the heat before I even descended Twin. I felt clumsy and stumbled many times. I welcomed Sugarloaf Mt, the last climb until the aid station in Mink Hollow on the other side. Sugarloaf had been our favorite mountain when David and I visited in March (mainly for the snowy breakneck descent on the other side). This time around I didn't really appreciate much, it felt like the climb never ended and all I could think about was the cold (in comparison) rock that my hands touched as I climbed. I just wanted to lay down and try to soak it all up. After what seemed like hours I was starting the descent. It was a lot slower then when David and I did it in a foot of snow in March, and a lot less fun, but finally (finally!) I was coming into the aid station where David and Reis were waiting. This was the most time I spent at any aid station. I sat down, drank as much as I possibly could, and ate some shot blocks while David refilled my bottles and Reis tried to lick the dried salt off me.

David told me he was going to run with me, and at this point I couldn't argue! I'd love the company, but that was me being selfish. Only a week post-100 with a sore knee, David probably shouldn't have gone… But like I said, I couldn't argue. We left poor Reis-baabe in the good hands of Monica's cousin, Steve, who was waiting for Jesse to come in with Monica pacing. Jeff would take Reis back to the car and to the finish, but I felt horrible as we started climbing up Plateau Mt. listening to her cry!

According to my Garmin, the climb up Plateau had the most elevation gain per mile all day, but it hardly felt like it with David at my side! The water also might have helped... We spent a long time catching each other up on the day; I was very intrigued to hear about all the aid station talk. Apparently the volunteers thought I was moving through aid stations much too quick, while carrying so little, and concluded that it would catch up to me, as would Sheryl Wheeler (the second place female). Sheryl Wheeler is a great ultra runner, and has always impressed me with her steadiness, but I hadn't seen her since the start and didn't plan on it. David told me how people thought that this was Sheryl's type of race, the difficulty and now that we were 40 miles in… But it is also my type of race! This talk gave me a little extra fuel and we put away the miles to the next aid (another 10 miles). Once there, it would only be four to the next, then the 1.5 road to the finish… It seemed like forever till the aid station, but it was a welcome sight. We moved through quickly, each drinking coke, topping off water, and I grabbed a handful of little potatoes. I think David was fasting through this run, he didn't eat anything!

The four mile section was a breeze in comparison to the other stretches, I hardly remember it. Soon enough we were passing Mt. Tremper fire tower and starting our descent. We ran into Jeff and Reis so I knew we must be getting close to the road and ultimately the finish! The descent however took much longer then expected and I realized how far Jeff and Reis must've ran up to see us. Poor girlie was so tired from the long day, she could hardly keep up with David and I (something extremely rare). I knew David's knee was bothering him pretty good also, so I didn't rush this section. I knew no one was on my heels and it would be over soon enough! Finally, we were hitting the road and I set off towards the finish line on my own. 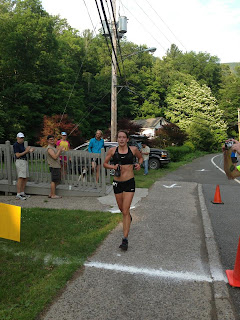 I finished 3rd overall in 13:32. Denis Mikhaylov had finished first in 11:51, and Ryan Welts second in 12:11. Pretty crazy for 50(ish) mile times! This race was definitely the hardest course I've ever run, but I loved it! I will definitely go back next year and try to squeak under 13 hours at the least. I think weather depending and perhaps being a little more prepared for those long stretches would help. 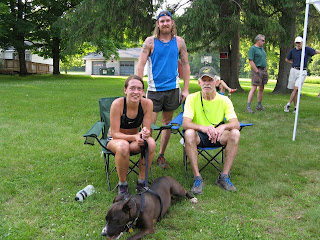 We hung around for a while after the race, eating some of the awesome food, talking, and watching more runners come in. It's so awesome to have the support that I do at these races, David and Jeff moved constantly throughout the day, making sure I had everything that I needed (even if it was a 2 mile run/hike to an aid station!), pacing me over some tough miles, and watching my pup! Definitely wouldn't be the same without them.