Its been a long time since I've blogged, so I caught up on the year in a previous blog post (link).

I was really excited for Manitou's Revenge this year! I loved the race last year (link), and just love the Catskills in general. Plus, so many friends were also running the race! Going into this race, I knew I wasn't in as good of shape as last year, especially for mountain climbing, but I also knew that there were some things I could improve on from last year. I was fairly optimistic that I could run around the same time, or better - I just needed to be smarter!

On Friday, David and I picked Becky and Jeff up in the afternoon to head to the Catskills. We picked up our packets, got a couple pizzas and headed to the Weyside Inn, the same place we stayed last year. We chatted a little with Amey, John, Jeff, and Travis, who were staying at the Inn as well, before David and I got our race essentials ready for the morning and hit the hay.

The wake up was early, but David and I are super efficient at getting ready so we get up as late as possible! We woke up at 3:30 and were heading to the start by 3:45 (we even beat early-bird John Johnson there!)

The race had to start in waves this year due to the DEC permit, so David and I started out in the first wave with our friend from central PA, Ian Grettenberger, and some familiar top runners including my fellow inov8 team member Ben Nephew, last year's second place Ryan Welts, Brian Rusieki, and last year's second female, Sheryl Wheeler. The pace started pretty fast for the 3 miles out the road, but I settled in behind the lead pack with David and Ian. By the time we hit trail, I dropped back into a pace of my own.

I found myself more alone than last year, most likely due to the wave start, but with trails and views like these, I didn't dwell on it. I love the section leading into North-South lake aid at 17 along some open rock ledges. Becky and Jeff were waiting for me at the aid, and I refreshed my water bottle, took a few gels and headed out. 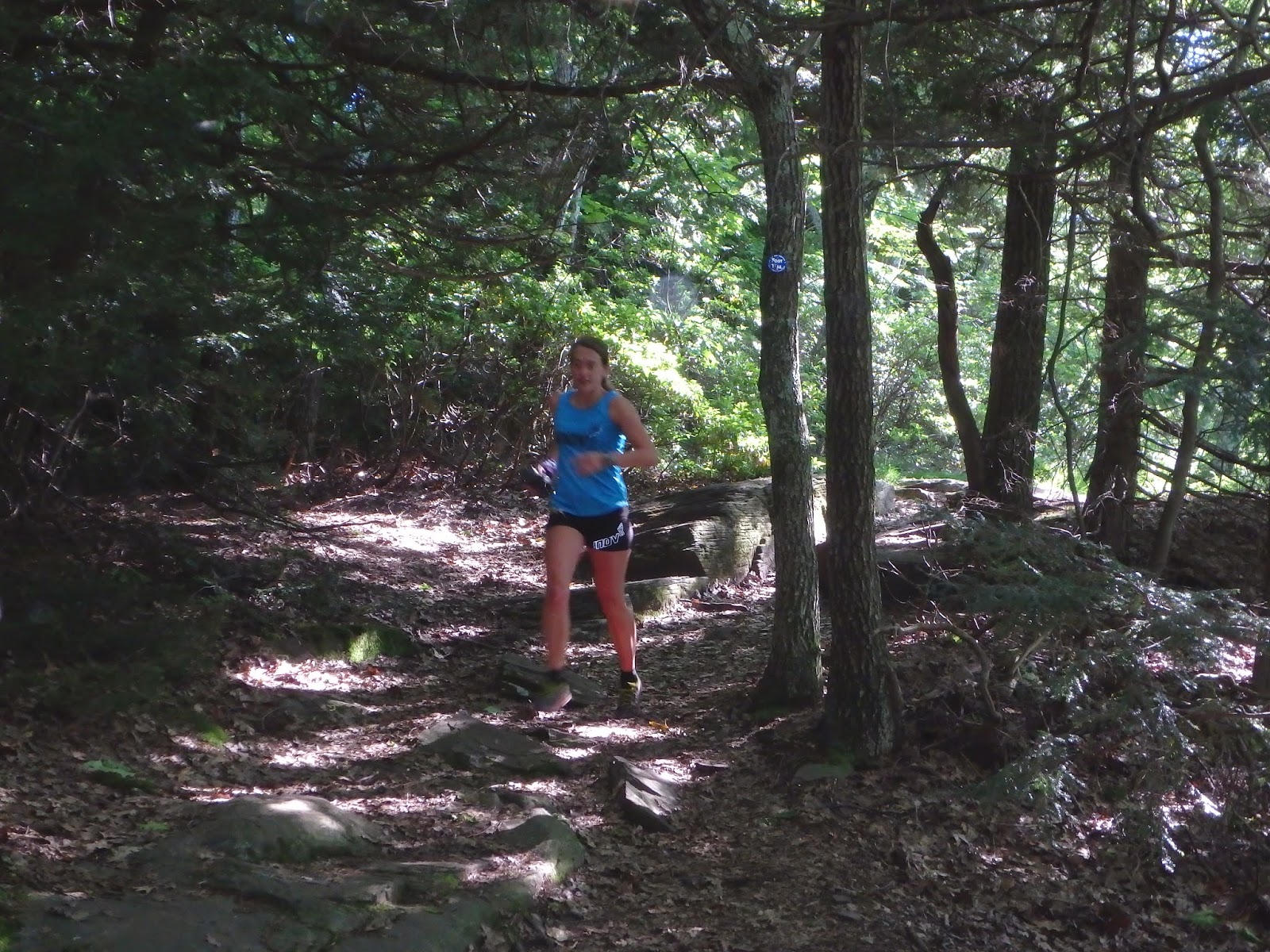 After the long descent into Palenville aid, I grabbed some boiled potatoes and sandwiches. As I took my pack from Jeff, I asked how David was doing and if he also took his pack. The look on Jeff's face made my heart sink. I asked again, and he answered that David was lost; he didn't come through the first aid station and they didn't know where he was. I cursed. I knew exactly where he got lost, an area where I got confused, but knew to follow blue. Jeff assured me that they would find David and not to worry. I had nothing to do, but head out and up the long climb up Kaaterskill Mt. thinking of where David might be - I knew he would get back on course, but I was hoping he wouldn't be too discouraged.

The climb up Kaaterskill and over the mountain was much drier than last year, but still very muddy in areas. I also enjoy this section, and was still feeling really good. I definitely felt like I was moving faster than last year. As I descended into Platte Clove aid station, I was hoping to hear good news of David; sure enough, I saw only Amey Johnson there! This was good news to me, because I assumed that Jeff and Becky were with David. Amey told me that David and Ian were running together; I was relieved, at least they were together and had each other's company! She filled my bottles for me and asked if I wanted my handheld. I asked if she had my Platypus, which would be nice to tuck into my pack when empty, but it was with Becky and Jeff in my bag. Oh well, no big deal, I didn't think I needed it, but because I ran out of water last year early on this section, I was slightly nervous. 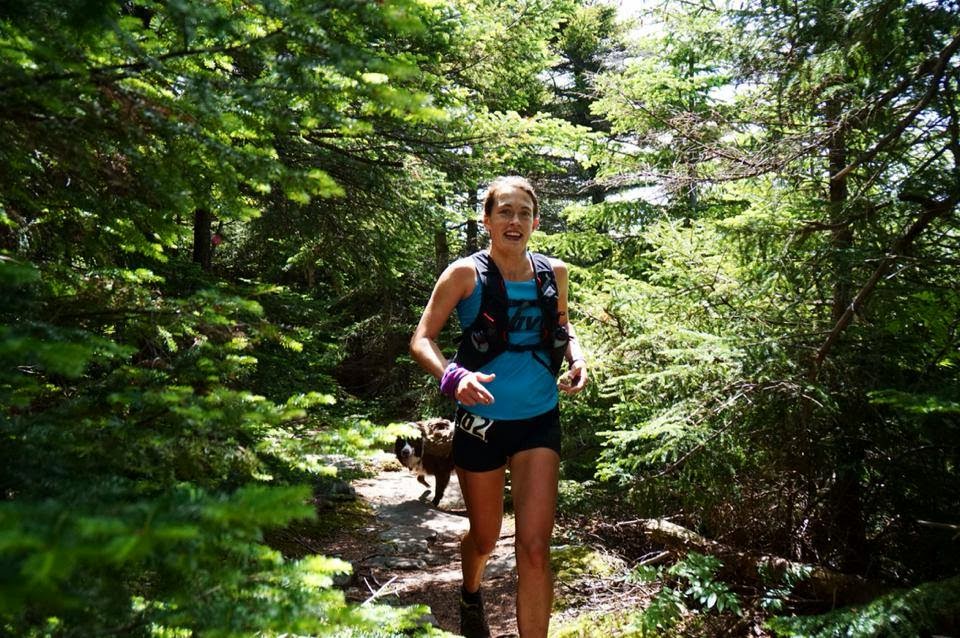 The Devil's Path is definitely my favorite section of the course, its absolutely amazing. There aren't trails like this in PA, or in many places. The path goes over Indian Head Mt, followed by Twin and Sugarloaf, and the trail is rugged - straight up and down over huge rocks, and roots. Its unreal. The section also went much better than last year. This year I had inov8's Race Ultra Vest, which made a huge difference. Now I had more water on me, and was able to use my hands! The cooler temperatures also made a difference. Last year, I was contemplating laying down on cool  (not "coal" David!) rocks. It went by quick, and as I was heading across Sugarloaf Mt., about to descend, I ran into Jeff running towards me! He was carrying my Platypus bottle, in case I needed it. What a sweetheart! It was nice running with Jeff for a little and hearing about the day, and how David was doing, from what they knew. He is crazy though, he ran up there, and preceded down in jeans! He kept up great though, jumping down the boulders and everything. We passed two runners on our way down, moving me into 7th place.

I grabbed a good bit of food at Mink Hollow aid station (38 miles) including some really amazing pierogies! I filled up and headed up the longest climb of the day - Plateau Mt. I felt like I ran this up really well - I used my arms a lot, and kept a really steady pace. Heading down Plateau however, I had a slight fall - not my first of the day, but definitely my worst! I stepped on an unstable rock, which tipped my ankle and made me step on a small log which spun and sent me headfirst into a tree! Thankfully, I managed to save my head, but slammed my arm into the tree. I laid there for a second, it was really painful! Couldn't stay there forever though, so I got up and headed into Silver Hollow aid station. There I grabbed some sandwiches and headed out quick. I asked how far ahead the next guy was - just for a goal - but they told me he was at least 20 minutes up... oh well - I could still race the clock!

I headed out and down across the nice large creek crossing and up the switchback towards Mt. Tremper. When I left the last aid they told me 5 miles to the next, and I was banking on this as I got closer. Hunger was making a pit in my stomach, but I really did not want a gel so I waited, and I waited, and wtf, I waited. About 6 or 7 miles in, I realized, the aid station wasn't there - I figured in my mind that they got lost, they didn't make it there in time, and they weren't gonna be there, I had to go the rest of the way without aid (not counting the aid at the bottom of the road, a mile from the finish). This took a heavy toll on my mental state, and my waiting for food took a toll. I bonked harder than I think I ever have. I thought I might pass out, I got so weak and stumbled everywhere. I took my last two gels immediately, one after the other, hoping they would kick in soon, as I tripped over pebbles and leaves. I've never felt like this running. I focused on keeping it together, hoping Mt. Tremper firetower would come into sight soon. It took so long... seriously forever. But eventually, I heard voices - the aid station was here! I grabbed some cookies and complained probably a little too much about their mislocation... (sorry!) and was on my way.

The descent started out a little difficult as my legs still felt like jelly and I didn't trust them too much. I gradually opened my stride a bit and tried to get this rocky down over with. Soon I heard Jeff yelling and him and Becky came into sight. Jeff said, "we didn't expect you for a while yet!" which was very encouraging. I hit the road and pushed out the mile to the finish. 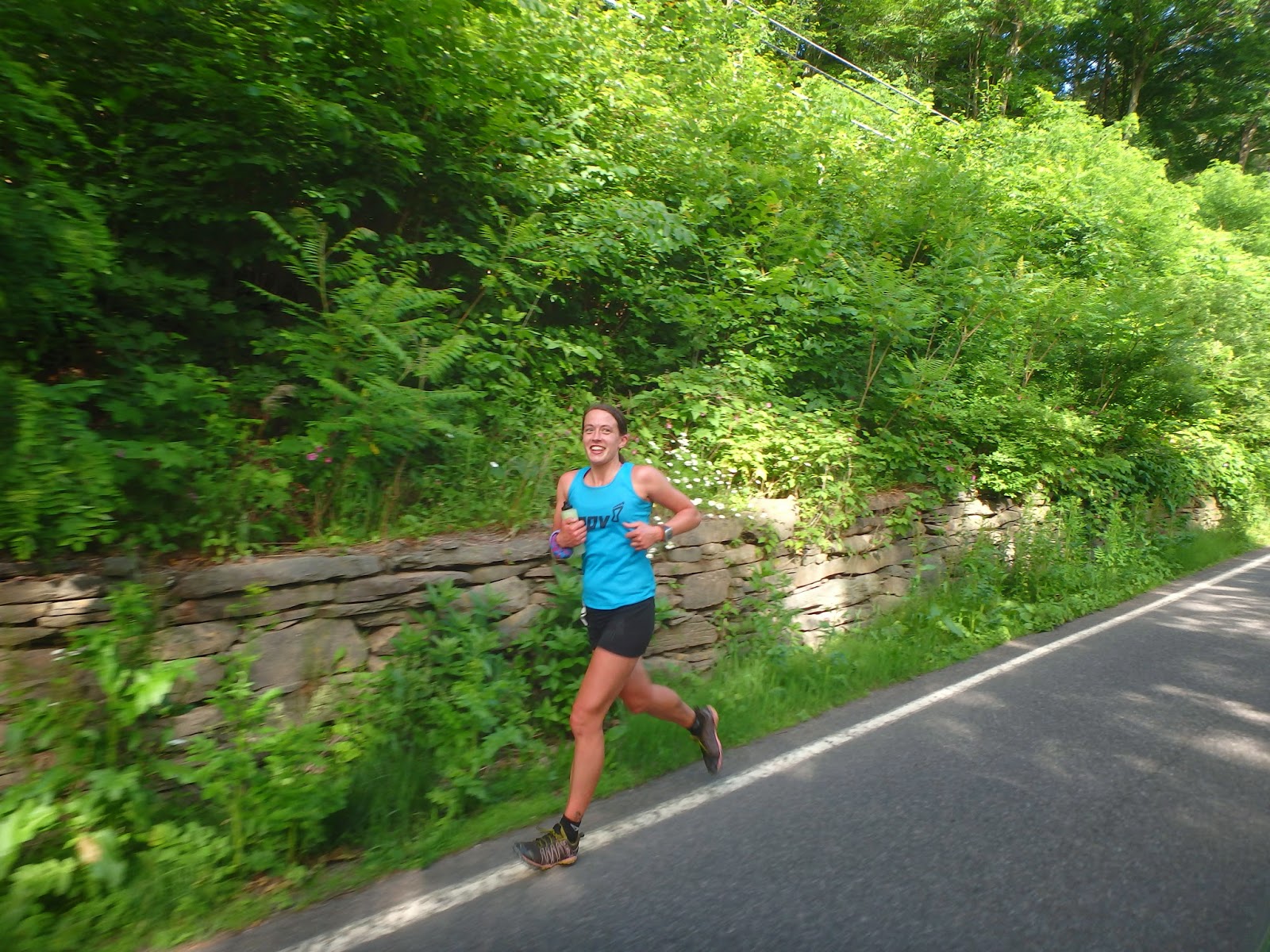 I finished 7th and 1st female, about 55 minutes faster than last year. The cooler temps definitely played a part, but I am very happy about how much smarter I ran.

For the race, I wore my Trailroc 226s, which I am so impressed with after this race. I love lightweight shoes, and was quite used to how quickly most have worn out, but these shoes are amazing - they don't look they've worn at all! I used to be a big New Balance fan (101s and 1010s), but those shoes fell apart almost instantly on the trails I run on - these Trailrocs though, have definitely withstood the test - I love them even more! They also had great traction, and drained water exceptionally well.

I also wore the new Race Ultra Vest, which was perfect for this race. I'm not traditionally a pack wearer, preferring to go lightweight, with only a bottle, but I'm starting to rethink this. I hardly noticed wearing the Race Ultra, it was so light and comfortable! I love the location of the bottles, and how easy they are to access, the pockets were also very ideal for storing gels. I removed the hydration bladder, making it even lighter, and for this race I didn't miss it.

Another essential that deserves a mention is the inov8 wrag. I wore one on my wrist for this race and used it often. Whenever I hit a stream, I simply pulled it off my wrist beforehand and dunked it in as I went through. This played a large part in keeping me cool, as I moved on and wiped my face and squeezed water over my head. It also was much quicker than stopping and splashing in a stream as I have done before.

After I finished, I ate way too much good food and then went up on the hill with Becky and Jeff to wait for David. He came down before dark and did awesome - basically he was dead last at one point and ended up finishing before dark and in 28th place! He stayed amazingly strong - mentally and physically! I'm so proud. 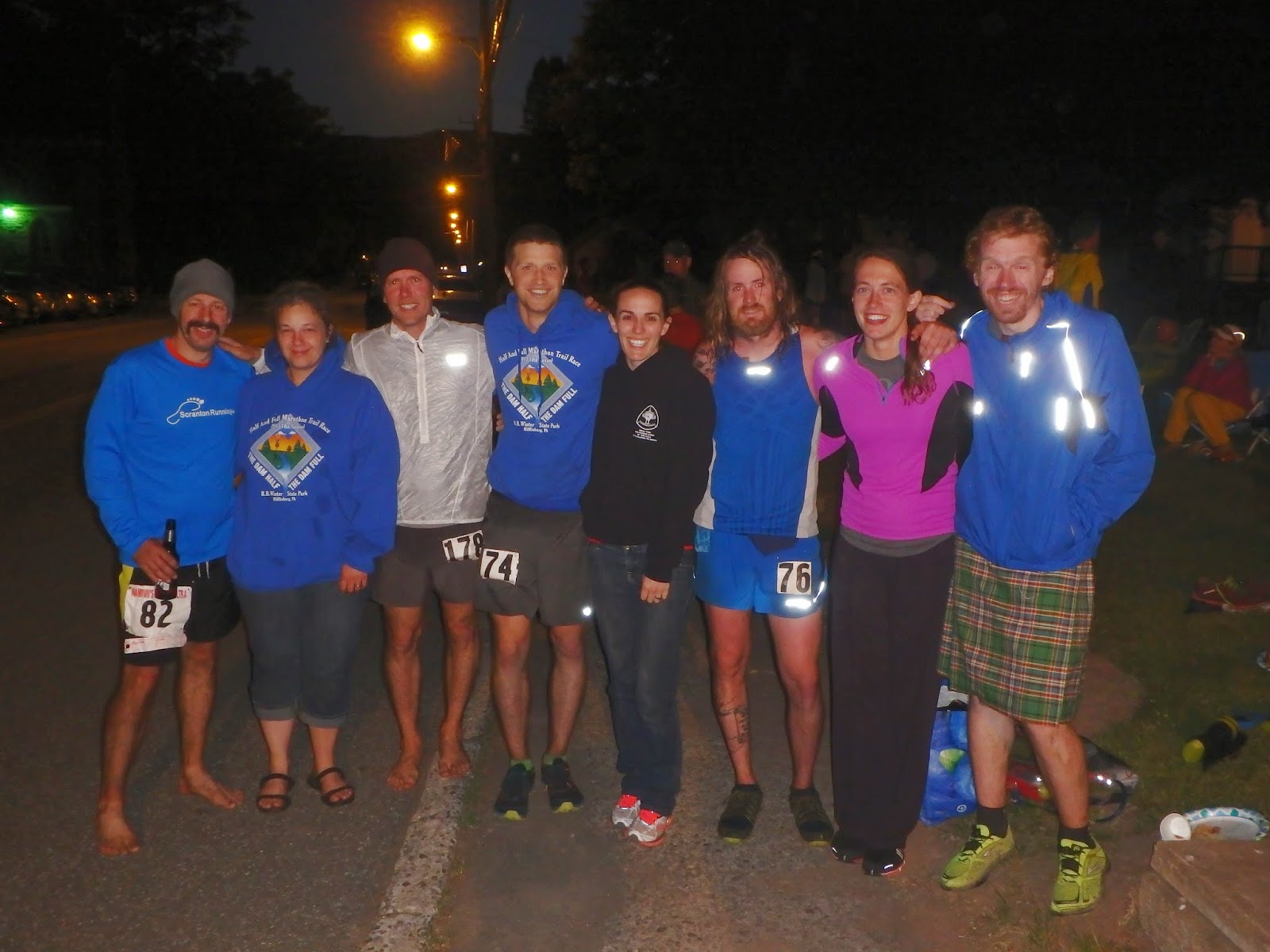 All in all, I thank my sponsor inov8 for all the awesome gear, and mostly I thank my crew Becky and Jeff - I know it was difficult for them, with all the confusion with David, but they were awesome! It seriously means so much to me that they come out here to these races - I can't thank them enough! 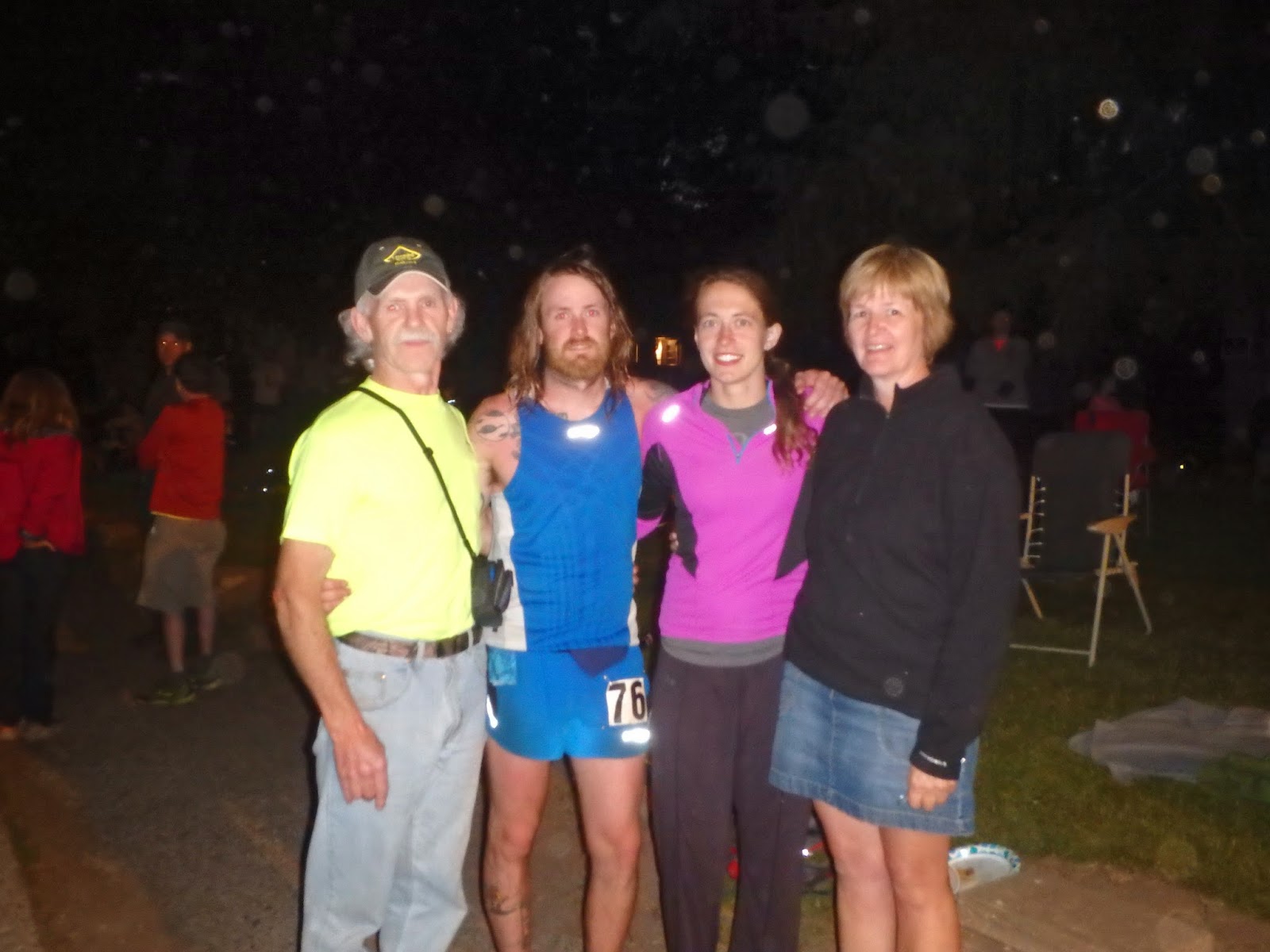 After this race - I feel much better mentally. Hardly running hills in preparation and not being too much in shape, I still managed to run smart and stay strong, and that's encouraging. My legs are pretty sore this week, as is my shoulder/arm that got whacked by the tree (I've got a pretty sweet bruise though!), but I'm really excited to start training for Eastern States 100, the next race on the agenda!